Due to volunteer availability, Nutcote is operating on reduced opening hours. Please see our Visit page for more details.

Exhibition details and notes from the curator.

Nutcote is celebrating the centenary of Little Obelia by holding an exhibition related to the underwater story. Enjoy drawings, first editions books, costumes from the Australian Ballet, modern fashions inspired by the story and more. Take a selfie in our underwater dress up room. Included with museum entry.

In 1921 the third book in the iconic Snugglepot and Cuddlpie series by May Gibbs was published. It was Little Obelia.

The centenary of Little Obelia is an opportunity to reflect on the amazing work and life of May Gibbs and the contributions she has made to Australian culture. I grew up loving May Gibbs, I even wanted to become a Marine Scientist so I could explore the amazing undersea world of the Fish Folk. I can't go for a bushwalk without imagining Big Bad Banksia Men watching me from the banksia trees. So when I was asked to curate this exhibition I was delighted.

In researching for the exhibition it became evident that May was a woman of many talents and wore many hats. I have endeavored to demonstrate this through the curation which includes exhibits in Nutcote house, in the Nutcote garden, and online. Below are some notes I have made on the exhibition, May Gibbs, and Little Obelia, that I hope will help guide you on-site, and online, to join the celebrations. 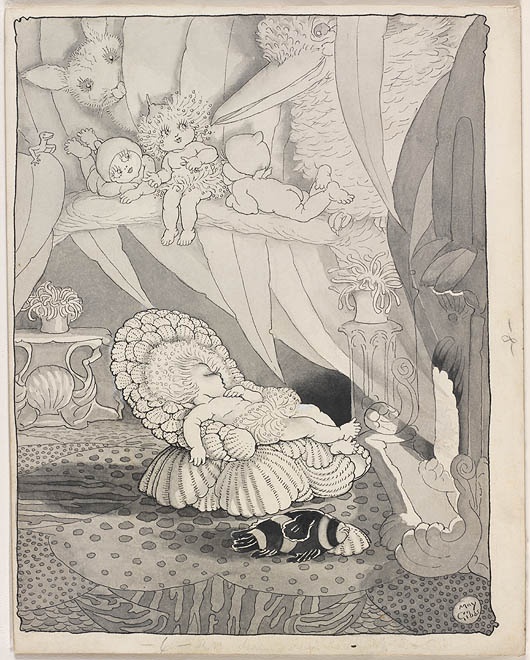 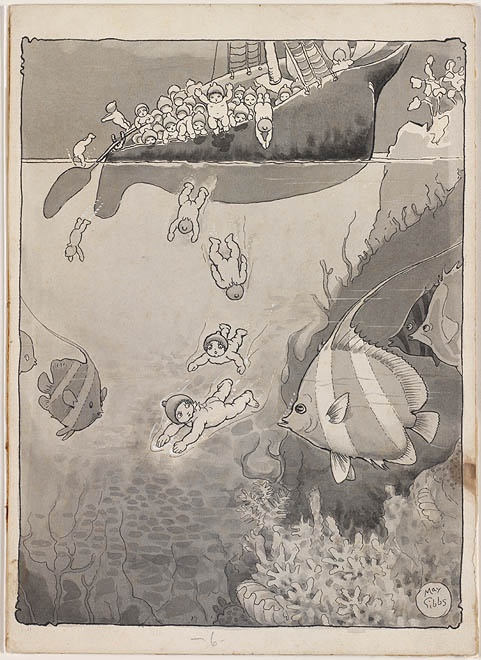 May the illustrator, artist, and story-teller

Most who encounter May Gibbs' work will see her as an artist and storyteller who created iconic Australian stories full of imaginative characters. May worked across many different styles, and across many different mediums. She was highly skilled in illustration, watercolor, oil painting, pen and ink, and drawing. You can see the range and depth of her creative practice in the archives of the NSW State Library, and in some of the works hanging at Nutcote. For the duration of the Little Obelia centenary celebrations, we have arranged copies of many of the illustrations from Little Obelia to be on display in the studio at Nutcote and also included the handwritten first page of Little Obelia. She often took clues from, or parodied, the work of other well-known artists. There is a beautiful example in the studio in the same style as Sydney Long's work Spirit of The Plains where May has replaced his brolgas with girls dancing. I think this demonstrates May Gibbs' sense of humour alongside her magpie tendencies to collect, experiment, and adapt.

In her storytelling, May Gibbs created detailed and engaging parallel fantasy worlds to our own, similar, but also very different. In little Obelia we find ourselves in Gumnut land with the gum nut folk and the bush creatures, and in the fabulous undersea world of the Fish Folk. The inhabitants of these worlds face many of the same challenges that humans do. May Gibbs draws on everyday matters such as going to the dentist, socialising, watching sport, cooperating with your neighbours, and the differences between country life and life in the Big Bad City. There is something everyone could relate to, and this no doubt contributed to the broad appeal of her works.

As part of the curation, I invited a number of people; scientists, urbanists, artists, writers, designers to read a chapter each of Little Obelia. You can access these readings , enriched with illustrations by May Gibbs, via this website, either as a full 1-hour story or as a series of 8 'bedtime' reads / listens. 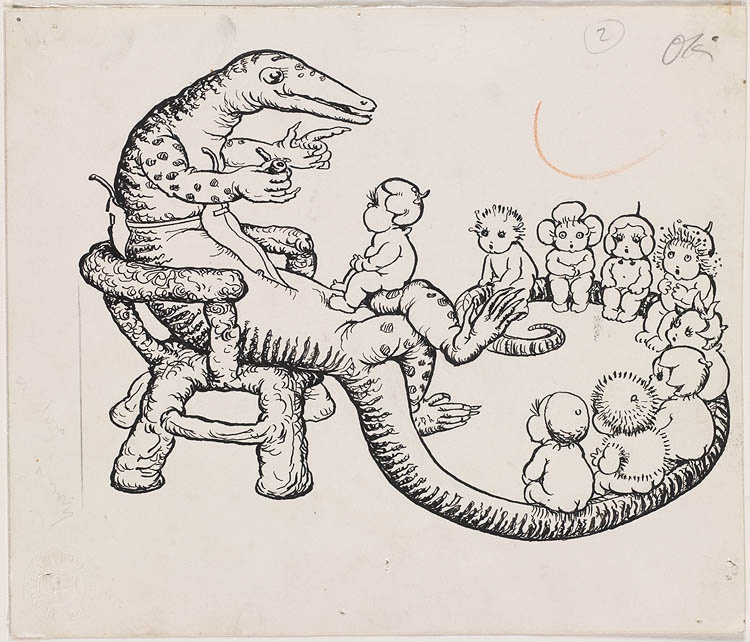 May the social commentator

In Little Obelia, May Gibbs engages in social commentary on a number of issues of the time, including an allusion to The Archibald Prize, which was first awarded in 1921 and would have been very much in the news of the day. We meet an artist who is painting a portrait for a prize and there is a wonderful illustration of Gum Nut folk at the Gallery. She also touches on urbanisation as well as social welfare issues such as health, gambling, drinking, homelessness, and conservation.

In her broader commercial work, she developed public health messaging around The Spanish Flu, Mother and Baby Health, and other issues. You can see examples of some of this work in Nutcote, particularly in the glass cabinet in May Gibbs bedroom.

You will also see some wonderful cartoons May Gibbs has created lampooning fashion and sporting characters in her posters of Hats and The English Cricket team that was touring Australia at the time. These are in the hallway between the living room and the kitchen. 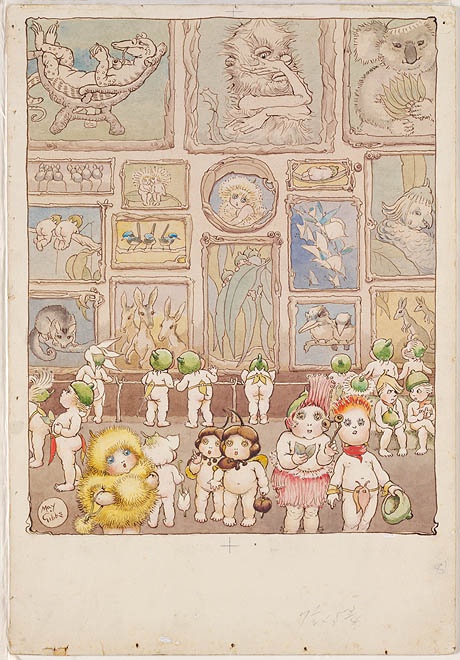 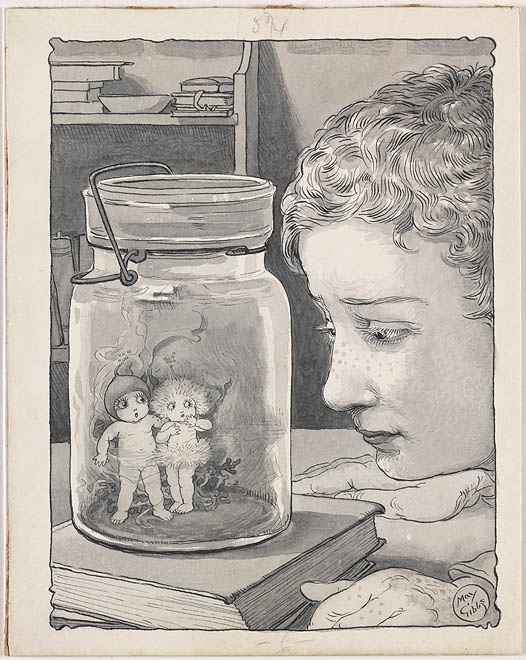 May the conservationist and naturalist

She documents, with the accuracy of a Botanic or Scientific Illustrator, many of the plants found in the Hawkesbury Sandstone ecosystems. Her animal illustrations are also highly detailed and accurate to species level. This led me to ask a number of scientists to take a look at her drawings and help me identify the species in them. You can listen to some of these people via the Little Obelia Pearls of Wisdom section on this site.

Mays Gibbs makes a number of statements in the books about the cruelty of humans towards animals and also highlights the need to protect both species and ecosystems. Many people I have interviewed over the process of curating this exhibition have expressed that May Gibbs books inspired them at a young age to engage with the wonders of the natural world. 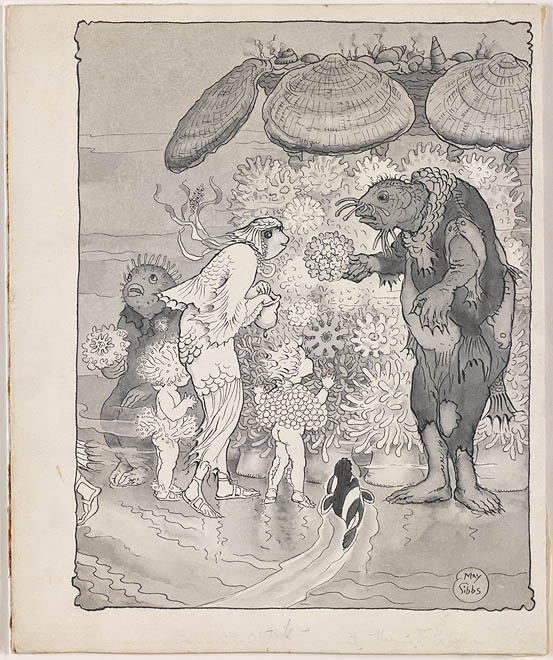 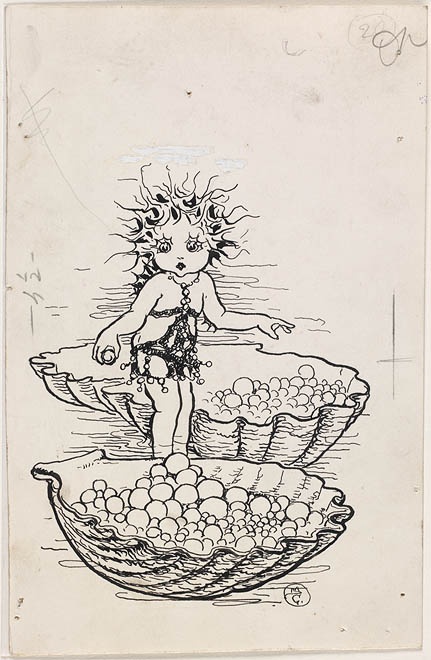 Little Obelia, and the other books in the trilogy, all have references to many different plant and animals species. In the context of knowledge 100 years ago, some of the species that are included in Little Obelia would have been both hard to see or gain access to (being under the sea and before there was access to diving gear). These include Obelia, fish, shells, seaweed, sea dragons, sea horses, pipefish, anemones, sea cucumbers, and nudibranchs. The question arose for me "How did May Gibbs know about these creatures'. I searched through her papers held by the State Library of NSW, biographies, writings about May Gibbs life, resources at Nutcote, and spoke to scientists about when different species were discovered and if they would have been possible to see without snorkeling or diving. I have come to the conclusion that May was both very observant, and an excellent researcher. She would have been able to access the library at the Australian Museum at the time of writing and may have had connections to museum staff who could have assisted her in identifying or seeing samples of unusual sea creatures. Obelia are hard to find and see, and to this day have had limited study done on them. It is surprising that May Gibbs was aware of them, perhaps on her exploration of rock pools in Western Australia, or along the east coast of Austalia, she can across an Obelia, described by Charlie Veron as 'one of the most beautiful and unusual creatures you can see'  and sought to find out more? That appears to be a mystery that will not be solved.

May Gibbs also appears to have clearly understood the relationship between Sea Anemones and Sea Anemone fish. Her illustrations consistently show them together. This may have come from observation, but more likely from access to research or an expert. She was an avid reader and had encyclopedias at her own home. There are some anomalies in her illustrations, such as European species being mixed with Australian species but this is more likely artistic license being used. 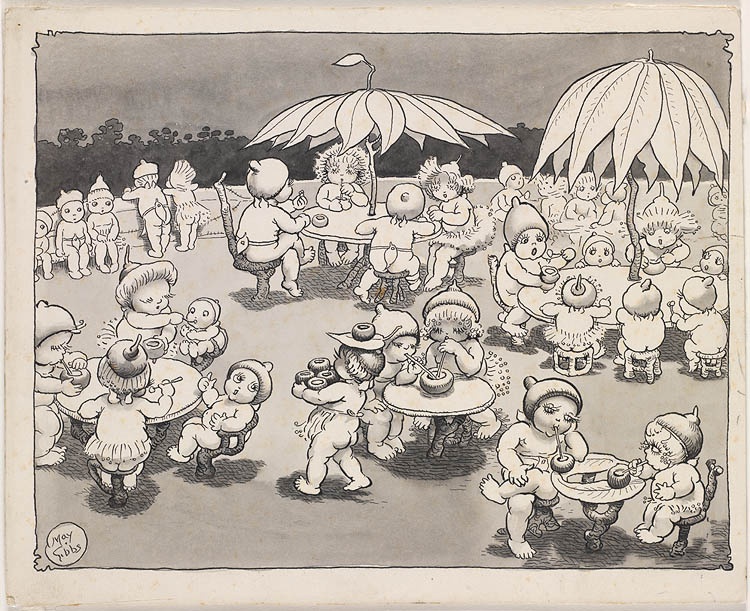 May Gibbs was a brilliant businesswoman. She produced highly commercial artwork, on commission, and serialised, in many styles for a variety of clients. She sold regular comic strips to newspapers, illustrated other authors' work, negotiated publishing deals for books, calendars, cards, textiles, and many other uses of her work. She suffered the indignity of being paid considerably less for her work than her male counterparts, which was standard practice.

The concept of writing a trilogy of books, of which Little Obelia is the third, is a very clever commercial strategy as it allows the author to leverage the success of the first book, to promote the subsequent ones. It is clear she took great joy in the success of her books as she would send signed copies to her parents, with slightly self-effacing, yet always humorous messages inside. You can see some of the messages she wrote, and learn more about May Gibbs and how she perceived herself in the large front room at the right-hand side of Nutcote. Many of her books are on display in the large glass cabinet, along with some illustrations of herself. 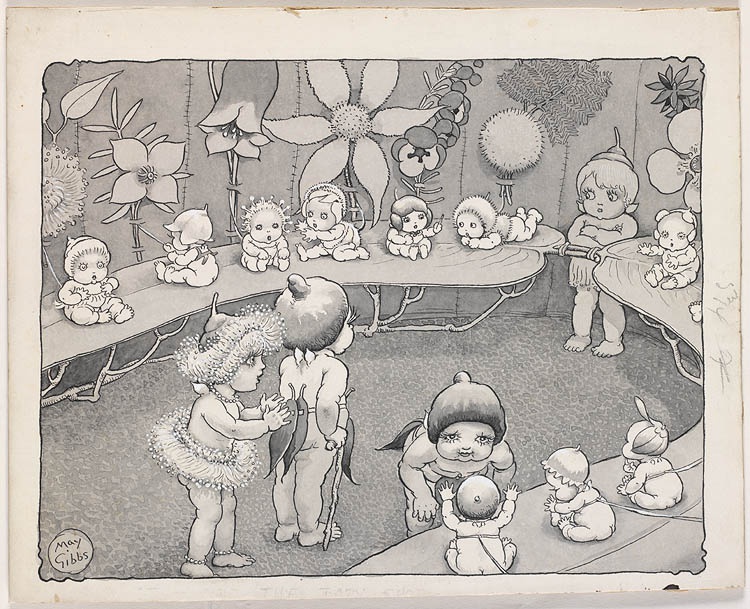 May Gibbs has left an amazing cultural legacy with her stories and characters inspiring many other creatives. With such appealing images to work with it is hardly surprising that you can find her images on products from T-Shrits to phone-cases, tattoos to beach towels, textile yardage to teacups, and in many paper-based items. The Nutcote shop is a great place find May Gibbs gifts and memorabilia.

Other high-profile Australian designers inspired by May Gibbs are the team from Romance Was Born who created a range of Little Obelia inspired clothing in 2015. We have a number of items from the collection on display in May Gibbs bedroom.

Of particular note, and a central feature of this exhibition, The Australian Ballet produced an adaptation of Snugglepot and Cuddlepie choreographed by Petal Miller-Ashmole, music composed by Richard Mills, with costume design by Hugh Colman. Four of the incredibly beautiful costumes from this ballet have been loaned to Nutcote by The Australian Ballet and are on display in the lounge room. These include Little Obelia, John Dory, Anne Chovy, and a Nudibranch. You can find an interview with Hugh Colman discussing his experience designing from May Gibbs' drawings, in the Pearls of Wisdom section of this site.

May Gibbs bequeathed her works (and copyright) to two charities, one of which is Cerebral Palsy Alliance ( known at that time as the Spastic Centre). This gift has provided the ability to license and commercialise May Gibbs works and has raised significant funds for them. May Gibbs' foresight, entrepreneurial nous, and social compassion is amply demonstrated in this act.

WANT TO KNOW MORE ABOUT MAY GIBBS AND HER WORKS AND LIFE?

Below are links to some of the excellent resources on May Gibbs, and her life, at the NSW State Library. You can also find a good collection of May Gibbs information at North Sydney Council's Stanton Library, and via the South Perth Historical Society's May Gibbs Art Museum

Some links to resources at the NSW State Library

Close to nature: May Gibbs and Australian botanical artists

May Gibbs and her fantasy world / by Robert Holden.

Mamie, also known as May Gibbs : a biography / by Jean Chapman.

An Interview with May Gibbs [videorecording] / director/producer, Maureen Walsh.

May Gibbs, mother of the gumnuts / Maureen Walsh.

Orana : journal of school and children's librarianship : special issue on May Gibbs and her home, Nutcote.

May Gibbs : more than a fairytale : an artistic life / Robert Holden & Jane Brummitt.